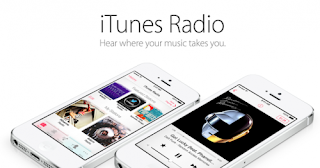 Once again, it was that time of year, June 10, the first day of the Worldwide Developers Conference held in San Francisco, where Apple brought the spotlight on iOS 7, and unveiled the new “Pandora” like service, iTunes Radio... a free Internet radio service featuring over 200 stations, who lets you listen to music stations featured by Apple and created by you yourself.  iTunes Radio evolves based on the music you play and download. Sony, Universal and Warner are all on board.


iTunes Radio has been considered a major threat to Pandora, the first mover in online radio. Although is said to more closely be similar to Pandora's model, Apple's lead over Pandora, is that it already knows your preference. Using your iTunes library, the company already creates Genius Mix playlists, and predicts which artists you may be interested in on iTunes.

Pandora minimized Apple's new service in a statement to CNBC and stressed the hold it has on intellectual property in the radio streaming space. "Apple's new feature is an evolution of their iTunes offering to bring it on par with other streaming music services that have added radio into their feature sets. We have spent the last 13 years singularly focused on redefining radio and benefit from unrivaled intellectual property, deep experience in delivering personalized play lists, and ubiquitous product availability across every platform. We make it effortless for our more than 200 million registered users to connect with the music they love anytime, anywhere," the company said in its statement.

iTunes Radio will offer music fans access to thousands of new songs every week, as well as serving up exclusive music from new and popular artists before you hear them anywhere else; will also be home to special events including live streams direct from the iTunes Festival in London and other exclusive iTunes Sessions. You can also ask Siri “Who plays that song?” or “Play more like this” and Siri will make it happen, or tell Siri to pause, stop or skip.


Apple’s iTunes Radio is set to launch, this fall,  in iOS 7 initially in the U.S. before rolling out internationally over time. The service is free to use in an ad-supported version, and iTunes Match subscribers can enjoy using the service ad-free.